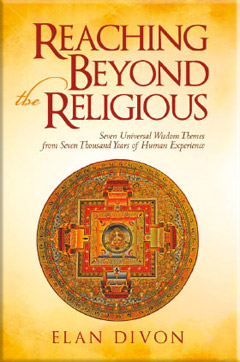 REACHING BEYOND THE RELIGIOUS

Reaching Beyond the Religious disrupts conventional ways of thinking about religion and ‘spirituality’, and invites you to discover a universal wisdom from which religion was born and our daily lives are governed.

Weaving between mythology and reality, East and West, the book unearths seven wisdom themes from across the religious divide and maps these onto the complexities of modern life. From Genesis, Job and the Hindu god, Shiva, to the dramatic Presidential campaigns of Hillary Clinton and Barack Obama; from the life stories of Biblical Patriarchs and Hindu icons to those of contemporary greats such as J.K. Rowling, Michael Jordan and Warren Buffett, this is a book that charts the teachings of the past onto the present while exploring humankind’s most pressing questions. Supported by compelling stories and examples drawn from pop culture, the natural world, and recent history, prepare to be wowed by what you discover.

* Recipient of the Editors Choice and Rising Star Awards.